Here you can see the underlying information regarding deals that have been supported by CapitalStackers so far.

We work with banks to mitigate liquidity risk and make funding safer for you and the borrower. This collaborative arrangement brings all round mutual benefits, and also makes the process smoother and more efficient. 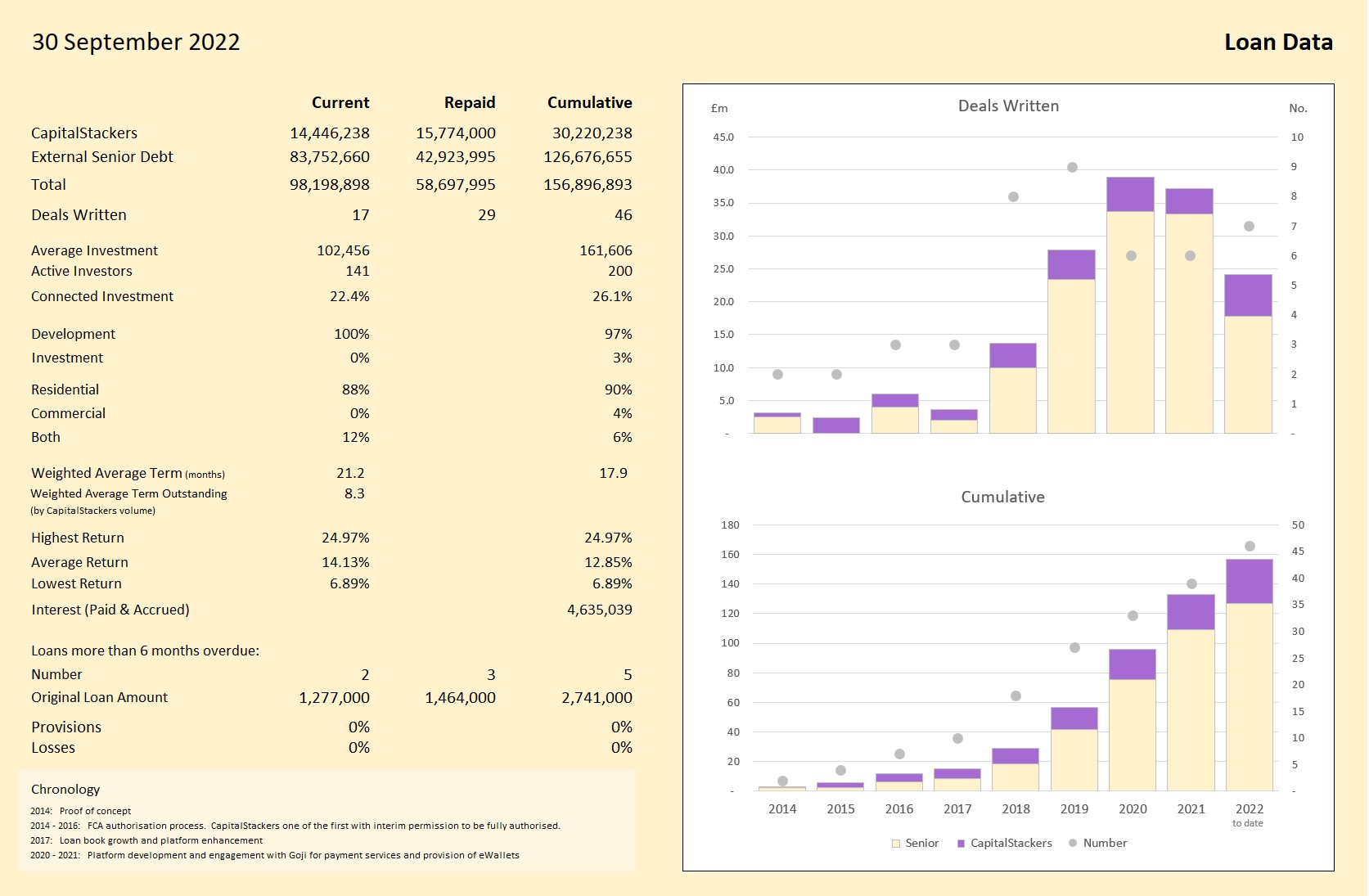 In the above charts, the purple sections show cash provided by our investors, and the lighter areas the funding raised through banks to enable developers to get projects off the ground that would otherwise never have been built.

The “Average Investment” reflects the appetite of some of our larger investors and disguises to some extent the fact that we have numerous smaller investors lending at, or marginally above, our minimum £2,500 threshold. “Connected Investment” is that proportion of CapitalStackers’ lending provided by our directors and their close family. We have invested in every scheme alongside you and feel it may give you comfort to know we also have ‘skin in the game’.

Compared to property investment loans, it’s important to understand that the risk profile for development finance is higher with construction and exit risks potentially leading to delays in repayment. It is not unusual for deals to run beyond their documented expiry date. Nor is it unusual within CapitalStackers for the sums involved to represent a relatively high proportion of the loan book. That’s because our deals are less frequent - albeit for higher amounts.

What’s more important is how we monitor and manage risk on loans that, for whatever reason, become protracted. This is our area of expertise – our home territory. The key statistics of Provisions and Losses testify to our proficiency and longstanding command of these situations. 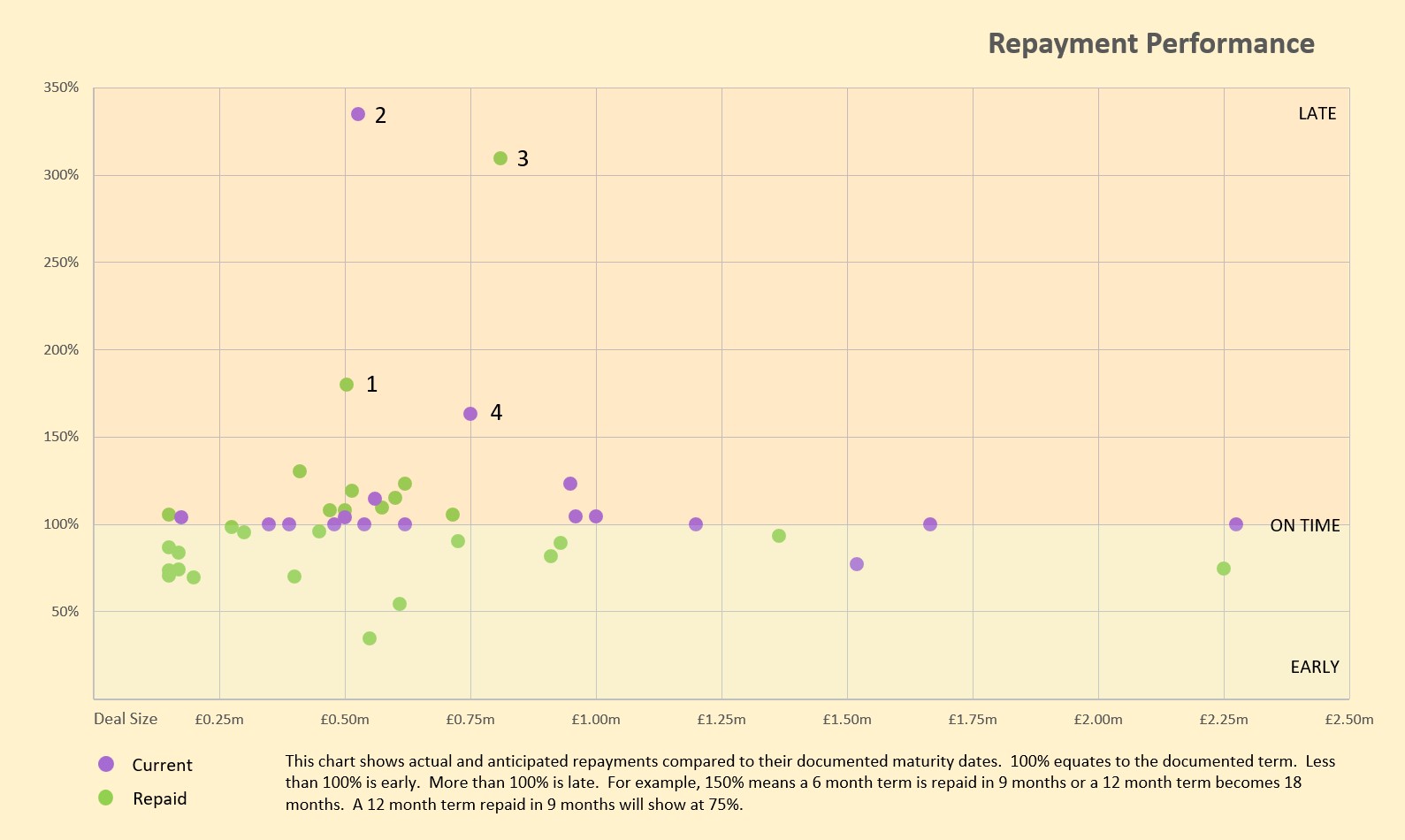 The above chart illustrates how setting the loan repayment term at the start of a deal is not an exact science. It is, however, a skill developed over decades in the industry, through all shades of the economic cycle. We could, of course, make these particular statistics look better by documenting a longer term. Some competitors do but we have no interest in compromising on the discipline and expectation management which is a visceral and integral part of this type of lending. When a deal goes way past its planned redemption date, we will understand the reasons why and when we continue to support the borrower it will be for equally sound business reasons. Two powerful examples stand out below:

(1) On this housing development the contractor (not the borrower) fell into financial difficulties leading to delays on site and ultimately went bust resulting in further delays before another contractor was appointed. Sales took longer than anticipated but the borrower’s management was keen to hold out for the prices they fully expected to achieve (and ultimately did). We were closely monitoring the entire situation in detail as it unfolded. Because some interim sales were completing and the risk ratios improving, we continued to support the developer and full repayment was achieved 14 months after the original 17 month term.

(2) This multi-storey apartment development was badly impacted by lockdown delays and cost overruns, and in particular a lift manufacturer closing its factory. Then a further delay arose due to retrospective implementation of additional fire protection measures. The building is now complete. A pre-sale negotiated during construction of the whole building to a housing association fell through, leaving the developer effectively having to market from scratch. Sales of individual units are being progressed and the scheme is now fully sold. The deal benefits from a substantial and well backed personal guarantee.

(3) This relates to the rump end of the first phase of a housing development which would have sold out and been repaid many months previously were it not for two successive purchasers failing to perform followed by the country going into lockdown and subsequent delay in the market opening back up again. The sale was eventually completed in July 2020, some 16 months late.

(4) Sales on this completed multi-storey building are progressing, albeit slowly due to numerous mortgage offers having to be refreshed.

Every deal is monitored meticulously by us on your behalf. We use independent monitoring surveyors on all developments and their reports and updated financial appraisals are continuously available in every deal Data Room so that there are never any surprises. In both of the above examples, at no point did we believe investors were at risk of losing capital or interest.

What about risk and reward?

The above overview of lending activity and loan performance is meaningless in the absence of a detailed insight into what return you can expect for the risk being taken. You will have seen on the Home page that the CapitalStackers’ model is all about plugging the real estate funding gap left behind when banks started lending less after the financial crisis. And that doesn’t mean only providing junior debt. We have also done a number of senior debt deals where the banking market hasn’t had either the time or capacity to get involved, and where we feel they may have missed a sound opportunity.

Our key measure of risk is the Loan to Value ratio (LTV). We have the ability to layer the capital stack and price the different risk bands accordingly. And because there are many other risk factors at play (in addition to the obvious market forces like supply and demand), the rewards on offer can be quite varied - as demonstrated in this scatter chart: 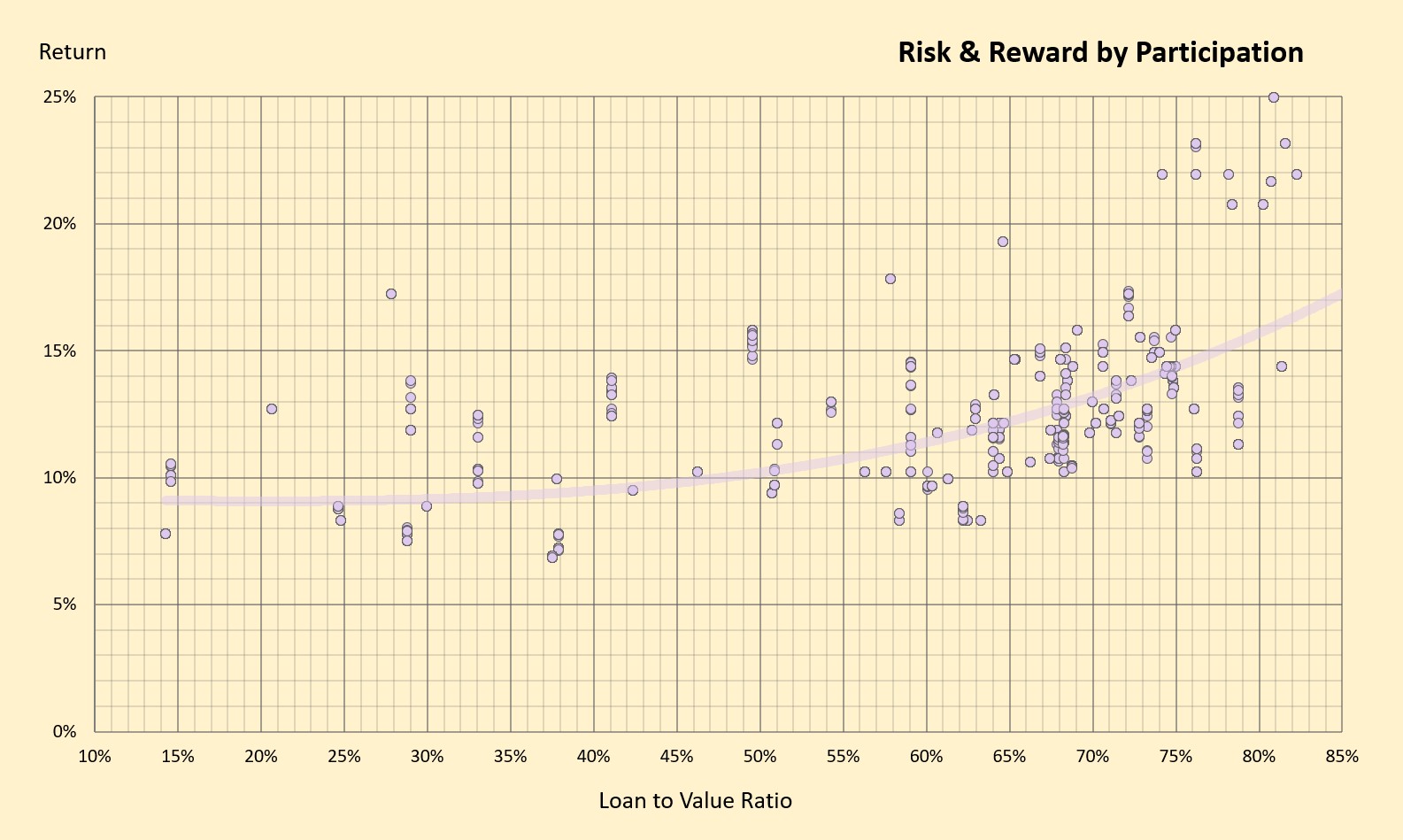 Each dot represents the return secured in the Primary Market after bidding for a participation at the relative LTV ratio. This is an IRR (Internal Rate of Return) calculation which takes into account the compounding of interest. Senior and low LTV junior loans will typically be single digit, whilst higher LTV junior loans are double digit in the mid to high teens. Our highest return to date for a ‘standard’ investment was 23% for a 76.5% LTV participation. Nice business if you can get it, but at the time we were the only show in town capable of completing the deal and drawing down within two weeks.

Standard investments are now capped at 75% LTV. However, we have enabled higher LTV deals using ‘Underwriter’ funding which typically caps out around 80% LTV. Underwriters are HNW, Sophisticated and experienced investors and sometimes introduced by the borrower. As highlighted in the chart, the majority of what we do is concentrated in the 60-75% LTV range generating on average low to mid teen returns.

These statistics do not include the Secondary Market, where it is possible for existing lenders to generate higher returns by selling loan parts at a premium on deals where the risk profile has improved.

If you want to know more about how we report these statistics, just call us on the number below.

We’ll be happy to talk you through them.

Past performance is not an indicator of future results

Join as an investor